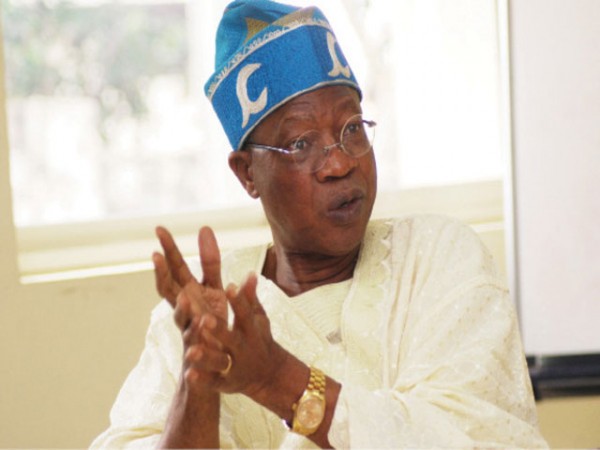 Lai Mohammed, minister of information, has asked Senate President Bukola Saraki to stop dancing on the graves of victims of the Offa robbery incident.

Mohammed said this while reacting to a comment credited to Saraki’s aide. The minister had asked Saraki, who said he donated a sum of N10 million to the victims, not to play politics with the incident.

Thereafter, Yusuph Olaniyonu, media aide to the senate, said Mohammed known to be an “unrestrained and compulsive perjurer” only commented on the incident to score cheap political points.

But the minster said the claim by the senate president that he donated the sum for the care of the robbery victims is false. “Instead of stopping at that, which in itself constitutes an acceptance of wrong-doing, Dr. Saraki went ahead to hurl insults at me, even when I have been largely restrained in issuing my earlier warning,” Mohammed said.

“Had I not been restrained, I would have gone ahead to divulge what actually transpired. For example, the claim by Dr. Saraki that he donated 10 million Naira to care for the
victims of the Offa robbery is patently false.

“He did not! The 10 million he referred to was donated when the Offa market got burnt, and it was made in Ilorin, not Offa. When Dr Saraki visited Offa to commiserate with the community in the aftermath of the robbery, he did not donate a dime! I challenge him to prove me wrong.

“But with politics in the air, the truth becomes the first casualty. Realising that he goofed, Dr. Bukola apparently caused the radio interview in question to be edited to remove the donation reference, and then re-aired. Is it not
an irony that the people who engaged in this egregious act of dishonesty are the same ones calling others names? “The people of Kwara, who are bone-tired of the long years of ‘bolekaja’ governance in the state, are all saying in one voice, ‘O to ge’ (enough is enough), and will soon have
the opportunity to express their frustration with their votes.”

In April, not less than 20 persons were killed after armed robbers invaded Offa and raided banks.

Checkout Vice President Osinbajo and His Family in New Photo

I am not a cheating boyfriend — Davido